The MED-SOLAR Project built a PV Power Plant in Palestine Energy Research Center, Partner of MED-SOLAR project implemented a photovoltaic plant in An-Najah hospital in Nablus, Palestine, which will allow filling the existing gaps of the electricity grids. 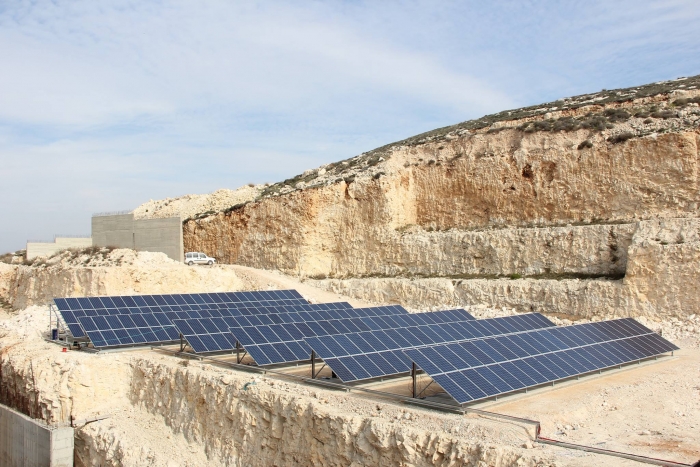 The Energy Research Center partners of the MED-SOLAR project, built in Palestine a pilot photovoltaic plant with the main objective of the promotion and the implementation of innovative technologies, as well as know-how transfer in the field of solar energy, particularly PV systems, in the target countries: Jordan, Lebanon and Palestine.
The partners of the MED-SOLAR, a project funded by the European Union under the ENPI CBC Med Programme, have been in charge of the identification and selection of the beneficiaries of the PV plants in their respective countries.

The Palestinian partner of the project, the “Energy Research Centre (ERC)”, analyzed and selected the Hospital “An-Najah National University Hospital” in Nablus. The PV plant is already prepared for the commissioning and it has a capacity of 100 kWp.
The institution will have the benefit of the PV plant with an implemented energy management system (EMS), which will provide different modes of operation according to the needs of the site.

It is expected that this facility will reduce the electricity cost of the hospital and the use of diesel fuel during the long hours of electricity cuts to provide better services to its patients.

The project started in January 2013 and it will definitely expire at the end of December 2015. To date, the project brings together more than 900 stakeholders from different sectors including SMEs, technological centers, universities and policy makers with the common objective of boosting solar energy in the area.

Impact on the community

The MED-SOLAR project does not limit itself by implementing these pilot plants but also implementing a communication strategy with the objective of sustaining the project in a long term. In order to reach this goal, the project organized a training session on 21st December for engineers, students and local industry to provide the tools to develop their own projects and a workshop on 22nd December for project developers, companies and policy makers to promote new projects through the experiences and results of the MED-SOLAR’s PV plant implementation in the region.

Jordan, Lebanon and Palestine face the same specific energy reality: the increase in the energy price and the weakness of the electrical grid (impossibility of having increase in the power supply, interruptions, etc.) which reduced the security of supply in critical facilities such as hospital and schools as well as the proper development of the small and medium size industries.

The 2007-2013 ENPI CBC Mediterranean Sea Basin Programme is a multilateral Cross-Border Cooperation Initiative funded by the European Neighbourhood and Partnerships Instrument (ENPI). The Programme objective is to promote the sustainable and harmonious cooperation process at the Mediterranean Basin level by dealing with the common challenges and enhancing its endogenous potential. It finances cooperation projects as contribution to the economic, social, environmental and cultural development of the Mediterranean region. The following 14 countries participate in the Programme: Cyprus, Egypt, France, Greece, Israel, Italy, Jordan, Lebanon, Malta, Palestinian Authority, Portugal, Spain, Syria, Tunisia. The Joint Managing Authority (JMA) is the Autonomous Region of Sardinia (Italy). Official Programme languages are Arabic, English and French.

The European Union is made up of 28 Member States who have decided to gradually link together their know-how, resources and destinies. Together, during a period of enlargement of 50 years, they have built a zone of stability, democracy and sustainable development whilst maintaining cultural diversity, tolerance and individual freedoms. The European Union is committed to sharing its achievements and its values with countries and peoples beyond its borders.

The Energy Research Center (ERC) was established in 1996, ERC is concerned with research, development, system design, feasibility studies, training in all conventional and renewable energy fields, energy management and energy conservation, since its establishment, the ERC has been working closely with many authorities and NGOs working in the energy and environmental sectors.

SOLARTYS is a Spanish cluster founded in 2009. Currently it works with companies from all over Spain related with solar energy and energy efficiency fields. The cluster plays a key role in fostering internationalization and competitiveness within its members, with the support of the Spanish Government, autonomous regional bodies and European Union. Related with international cooperation, SOLARTYS works with universities, research centres, companies and public bodies providing technical advice and promoting networking among all the stakeholders involved. www.solartys.org